Electromagnetic methods are capable of measuring either the electrical conductivity or magnetic susceptibility of soils (or, with newer EM systems, both, simultaneously and at different depths). 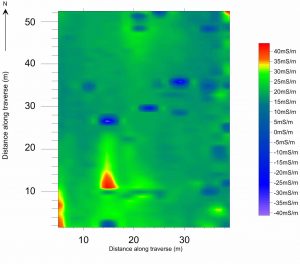 What can EM methods locate?

Magnetic susceptibility is the ability of an object to become temporarily magnetised when it enters another magnetic field. This is the scientific principal used in metal detectors, although – for archaeological purposes – the method is best used to find soils which have been contaminated with magnetically susceptible chemicals (such as iron), which are commonly associated with human occupational sites (such as villages or campsites).