There are several different types of aurora.

Well, actually, they’re all mostly the same thing, just viewed from a different distance/angle/exposure setting. Nonetheless, it is worthwhile trying to classify an auroral display, as certain things appear only at certain auroral strengths. For instance, a STEVE (strong thermal emission velocity enhancement) usually only occurs during extremely strong auroras.

This page aims to provide some examples of the known aurora types, along with a few other things you might see in the night sky.

This page can also be used as a guide when using the iOnTheSky AutoGAAG or Image Harvester systems.

These should be self-explanatory. Here’s an example from the iOnTheSky camera network: 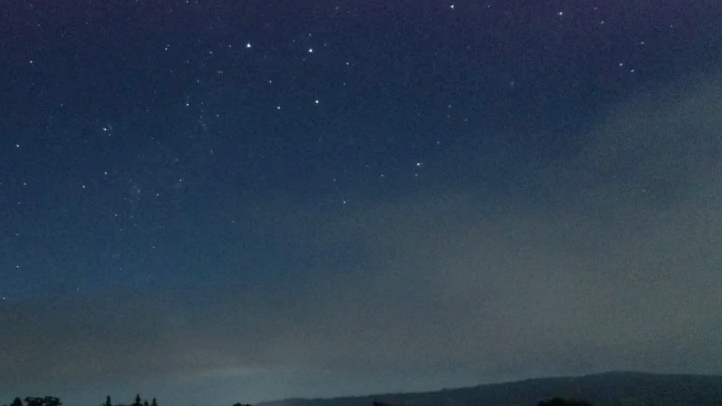 Light pollution is a growing problem to astrophotographers. For the purposes of the iOnTheSky AutoGAAG/Image Harvester forms, any form of man-made light is considered light pollution. For instance, this can be light from torches, car headlights, street lights, house lights, ships, fish farms, or cities.

The first example, by Daniel Lam, shows very small sources of light on the horizon (house lights) and city lights reflecting off clouds (to the left of the image): 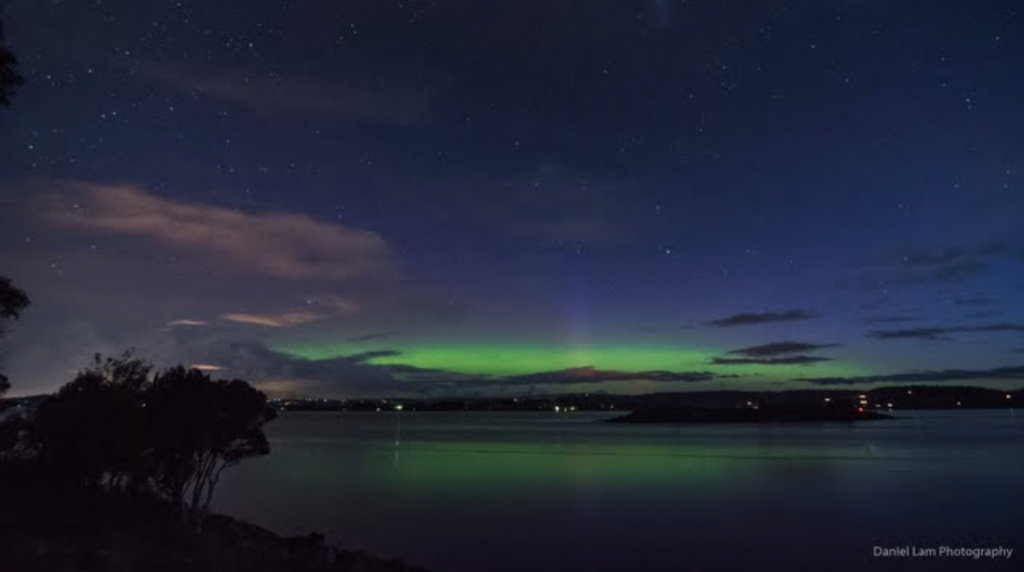 The second example is far more drastic. This shows light pollution from a fish farm (at the centre of the bottom of the image) reflecting off fog and low-lying cloud:

(The last two images were from iOnTheSky)

More examples can be found via SHAG.

This one is pretty obvious. In this case, I’m not talking about moonlight reflecting off trees/the ground. Instead, I am referring to when the Moon itself can be seen in your photo. The Moon can be seen in the lower-right corner of this example photograph from the iOnTheSky Generation 2 prototype camera: 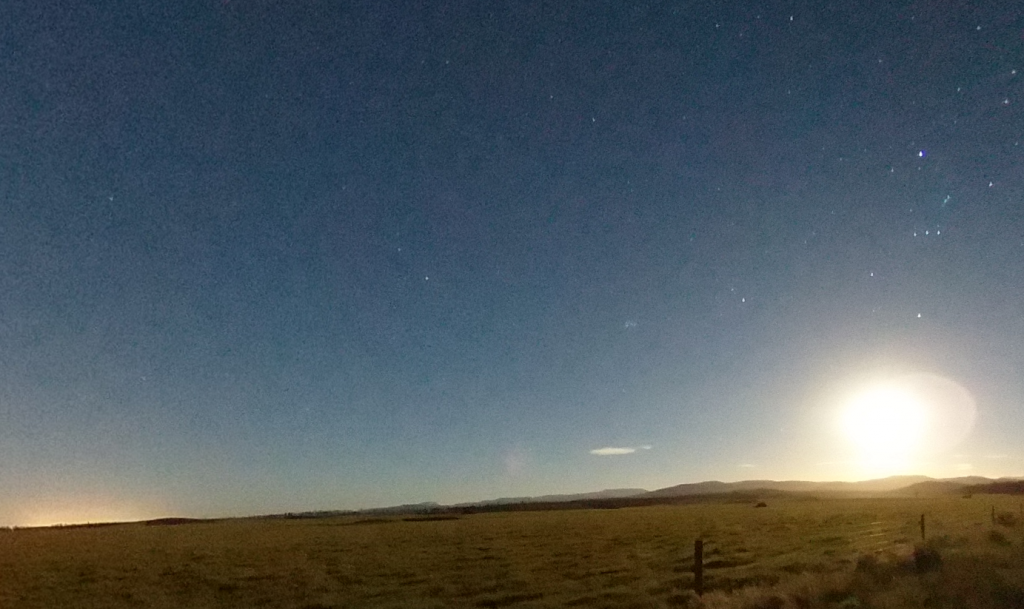 This is the galaxy in which we reside. It stretches throughout a great deal of the night sky (when it is above the horizon).

Here’s a photograph I took in mid-2017 when I visited Tasmania: 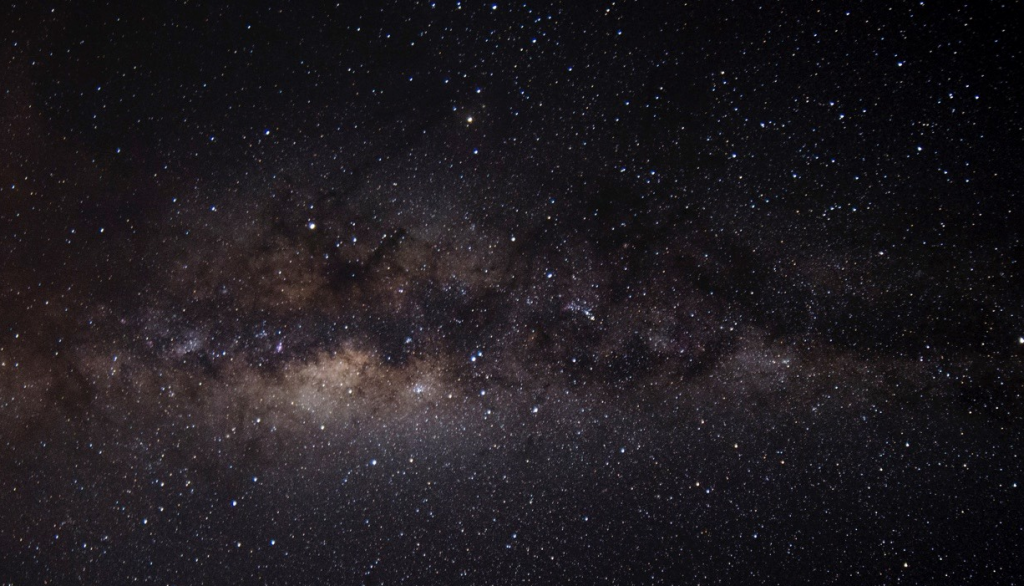 And here are two from Daniel Lam (the first one has aurora as well): 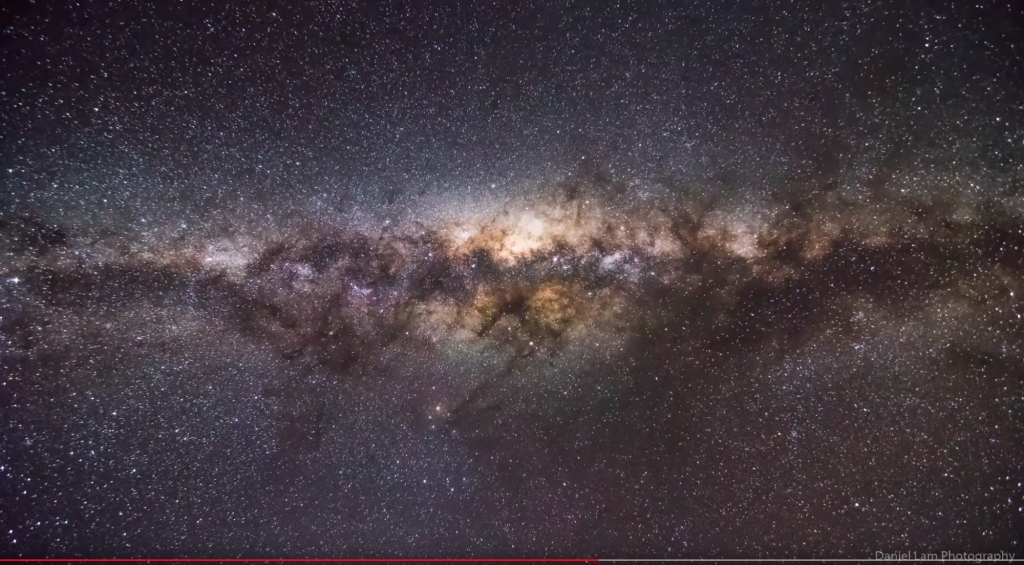 More examples can be found over in SHAG. 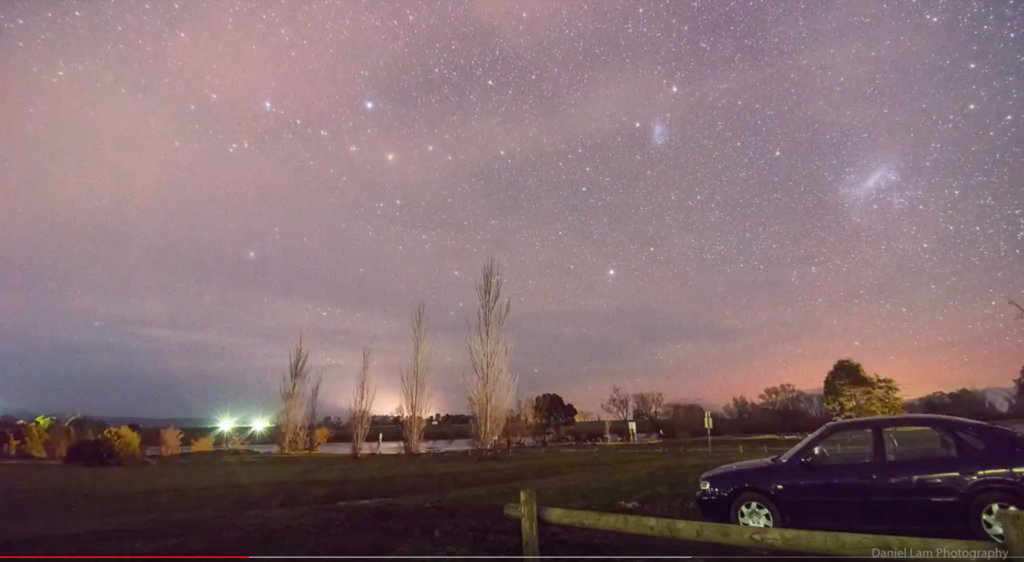 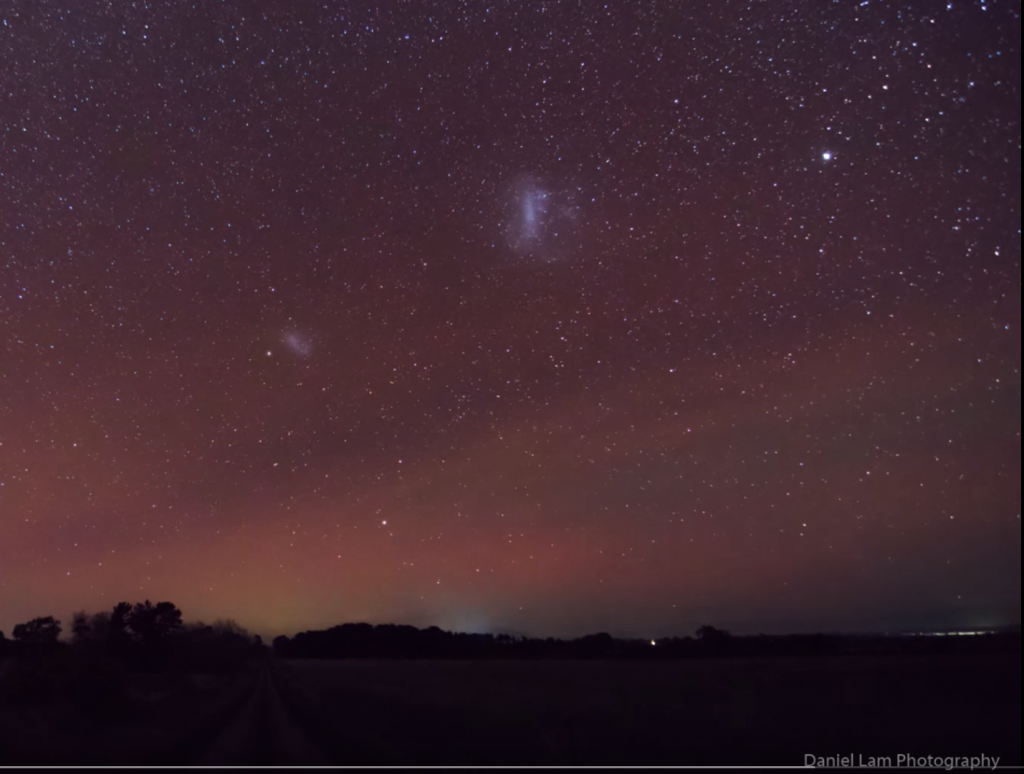 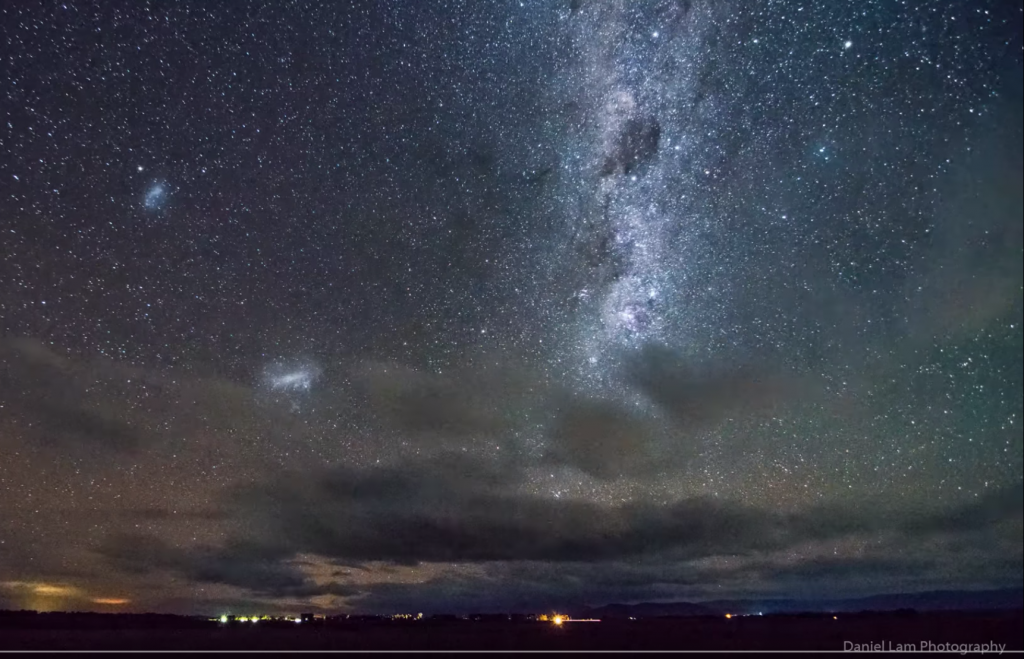 Airglow is often mistaken for aurora. It is triggered by a similar process, but is usually more diffuse than aurora, and is normally a different colour (but note that it can appear in a range of different colours, including reds, yellows, oranges, and greens).

A helpful guide for spotting it is to remember that space is black. If there is colour in between the stars, it’s either aurora or airglow.

There is a detailed explanation of airglow here.

Here is an example of green and red airglow (in the right half of the image) by Daniel Lam: 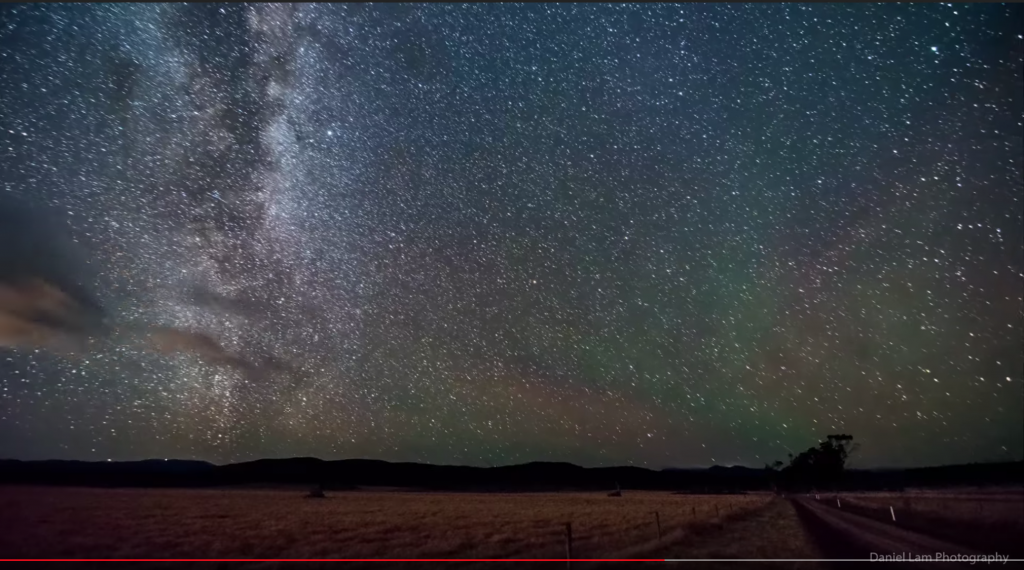 And another from Daniel Lam:

There are many more examples of airglow here and here.

Light pillars look similar to auroral beams but they are not auroral. Instead, they are formed when light reflects off ice crystals in the atmosphere.

Here is a fantastic example from Danka Dear: 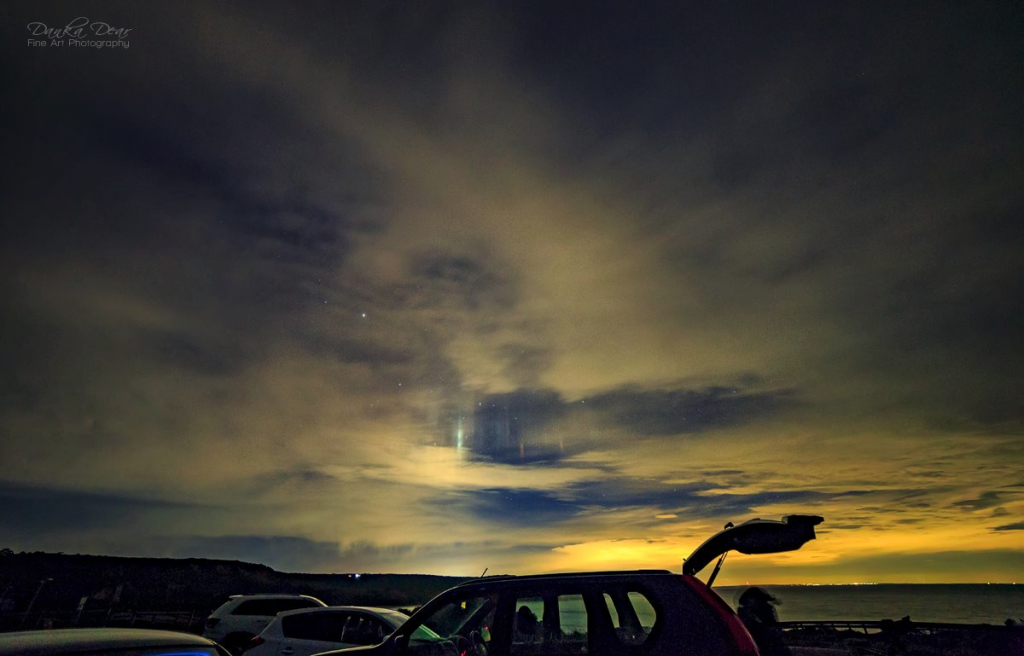 There is a great explanation and many example photographs of light pillars on Wikipedia.

In November 2018, I announced a new scale for measuring auroral brightness, known as the D-index. The D-index is based on what type of Aurora you can see in a photograph. Specifically:

This is the weakest/dimmest form of aurora; it can be photographed when the aurora is far away. It appears as a shapeless glow in the sky, much like airglow.

A good way of differentiating auroral glow from airglow is that auroral glow tends to be stratified (layered), with reds on the top, yellows in the middle, and greens near the horizon. Airglow tends to have more mixing of colours.

The important characteristic is that it is shapeless.

Here are some of my own photos of auroral glow: 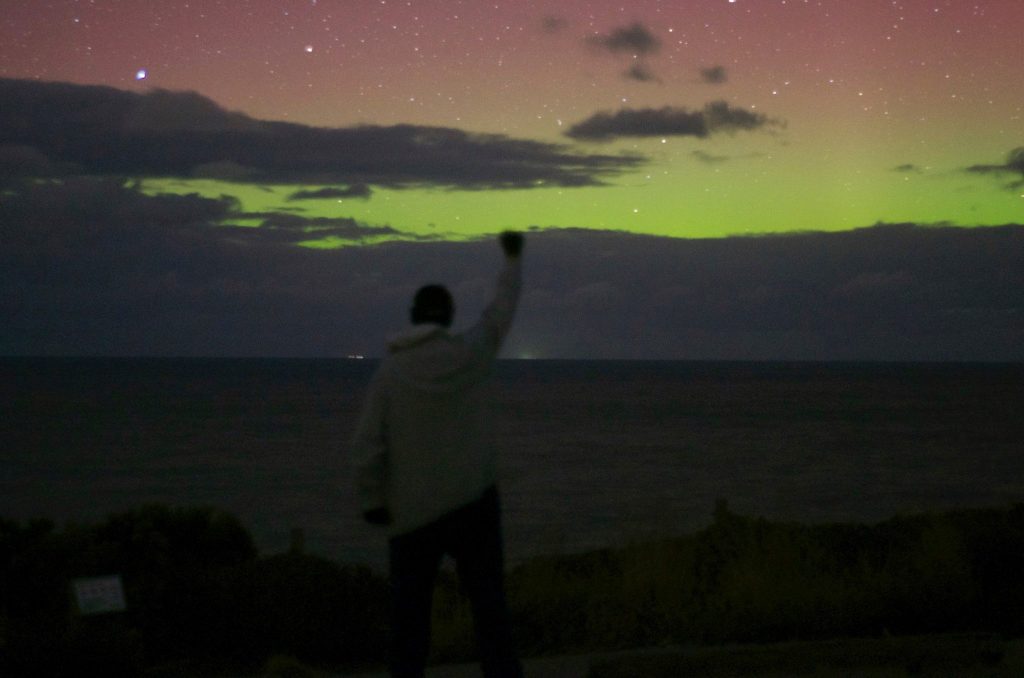 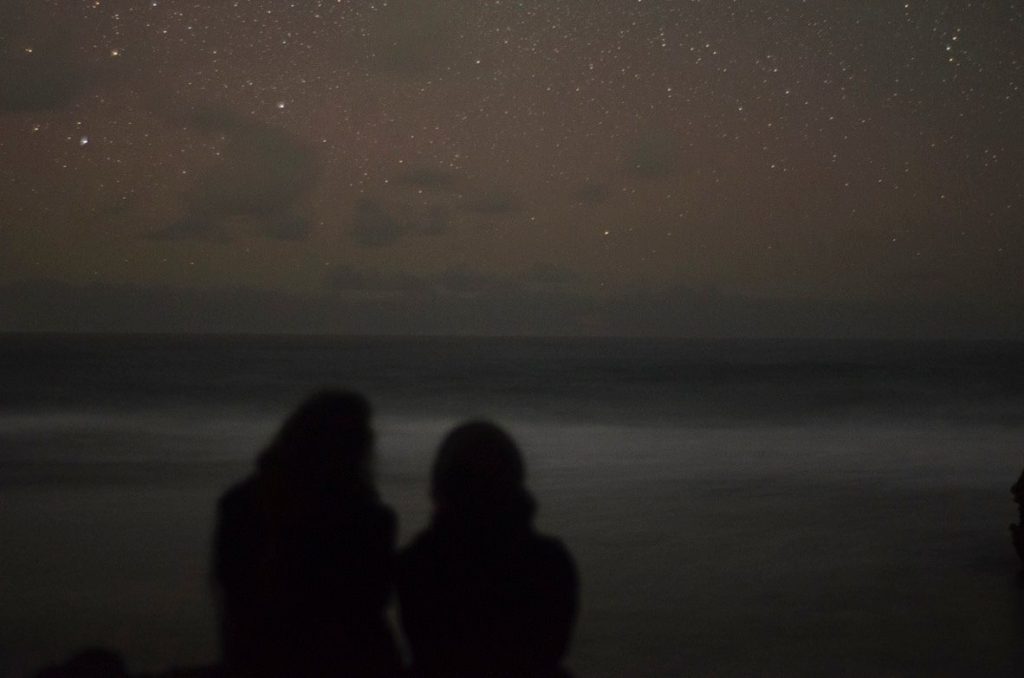 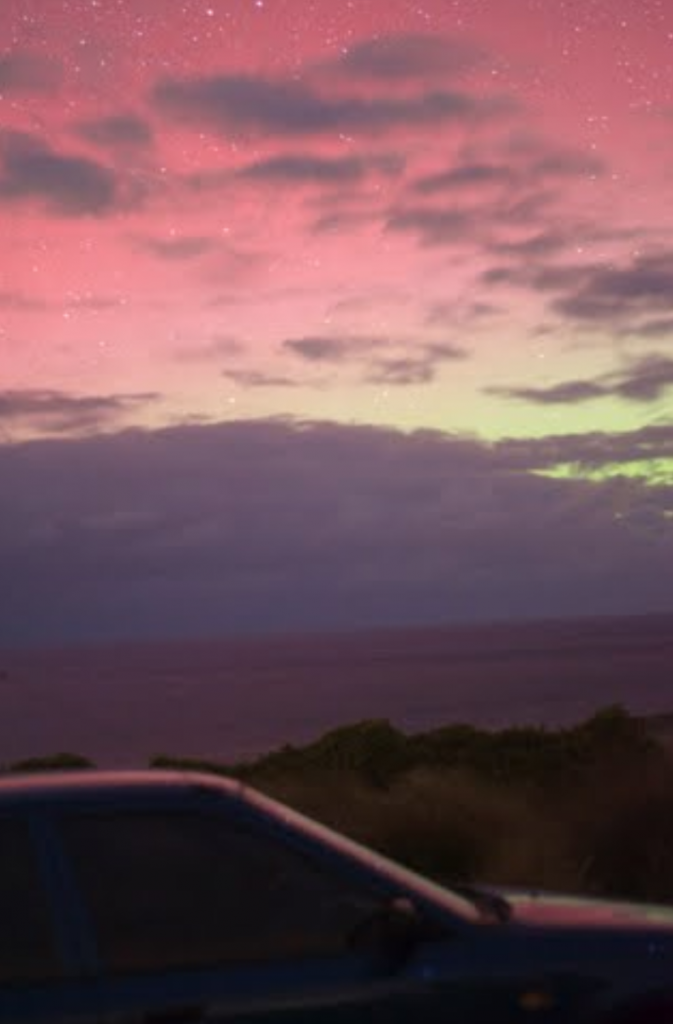 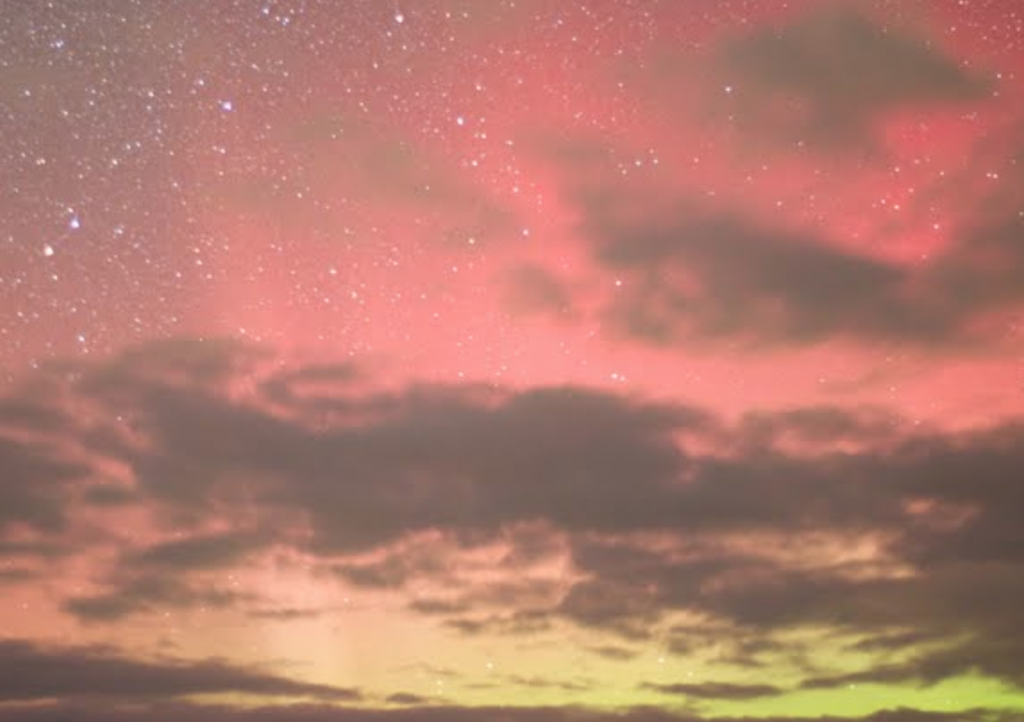 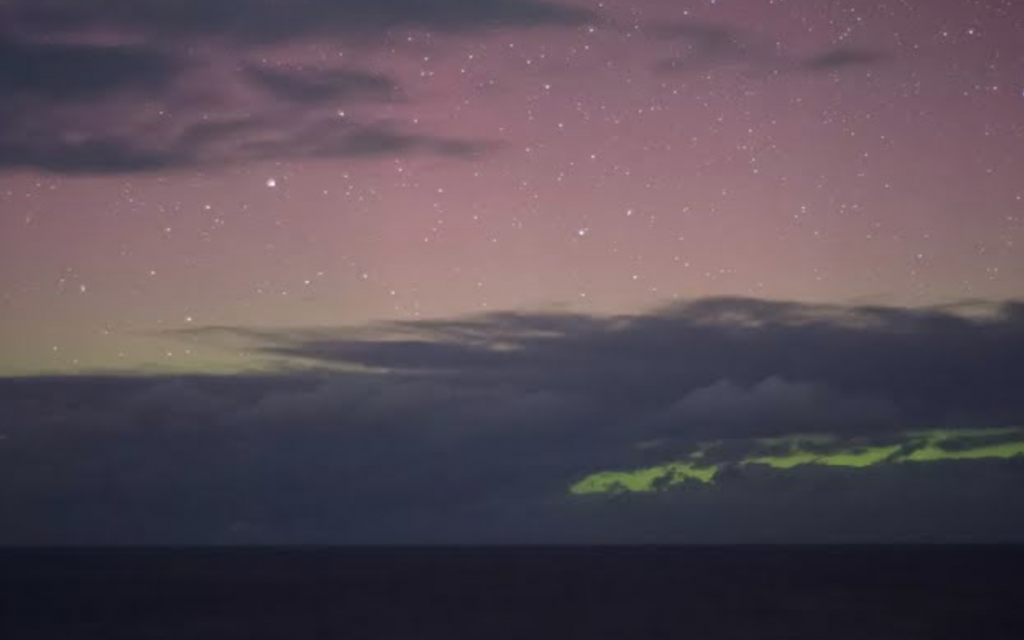 If the aurora is slightly stronger than it is when a glow is visible, the aurora itself moves further away from the magnetic pole (closer to the photographer). Therefore, the aurora appears higher in the air (especially when as far north as Australia or New Zealand).

The result is an arc- or rainbow-shaped aurora. It is usually green. 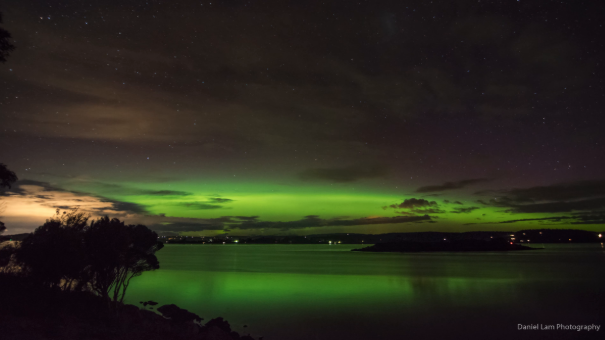 …and here are some examples from iOnTheSky: 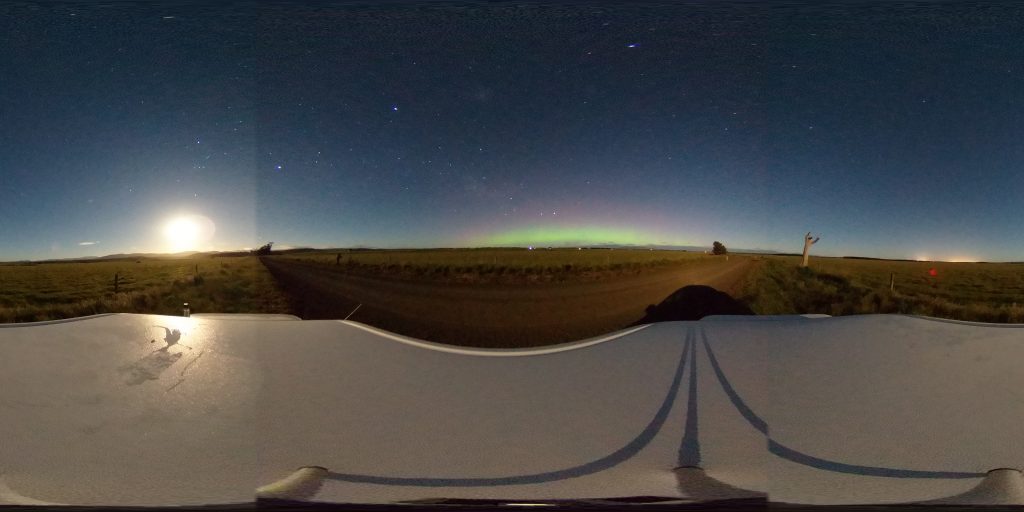 Once you look at auroral arcs, you realise that an auroral glow is really just the top of the auroral arc.

There are more examples over in SHAG.

Auroral beams are vertical lines of colour. They are often seen reaching upward out of auroral arcs. They can be a variety of colours. Blue beams are primarily caused by sunlight reflecting off the beams.

And a single faint beam in this photo by Daniel Lam (just to the right of the centre of the arc): 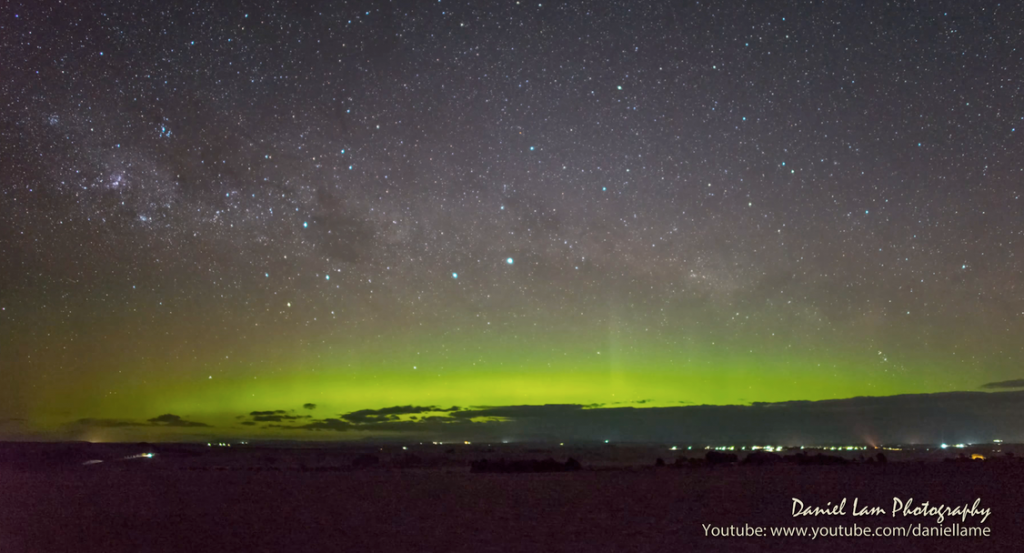 Even more examples of beams can be found in SHAG.

Turn up the aurora’s strength further, and a second arc will begin forming in front of the original arc. The formation of the new arc starts with the display of “blobs” of aurora, which – over the course of about a minute – gradually join up and merge to form the new arc.

Daniel Lam compiled a brilliant time-lapse video of a new arc forming (and, afterwards, when the aurora got weaker, dissipating). It can be viewed here.

Here are a few screenshots from Daniel’s time-lapse (with red rectangles I have added to highlight the blobs). The original auroral arc can be seen closer to the horizon. 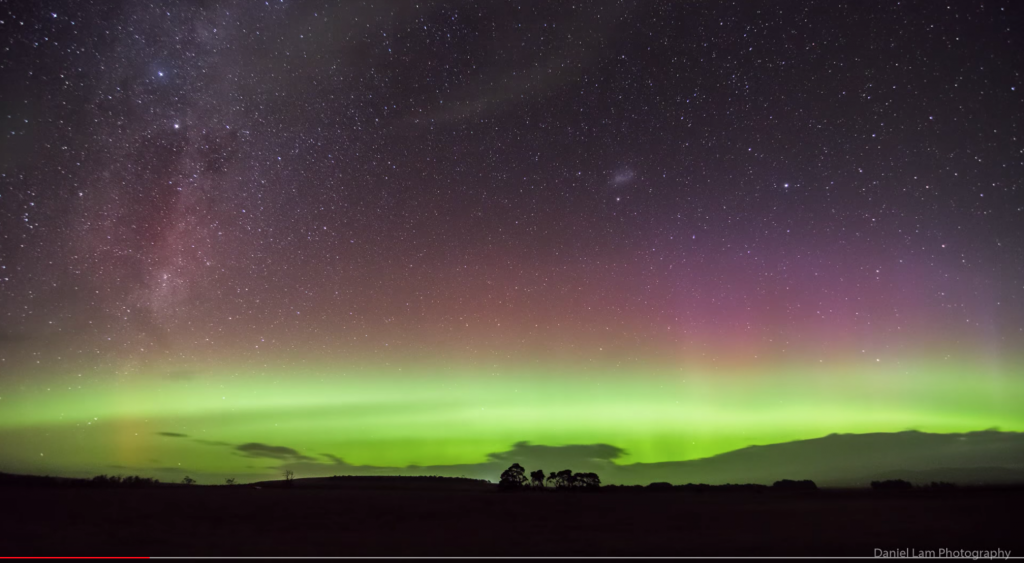 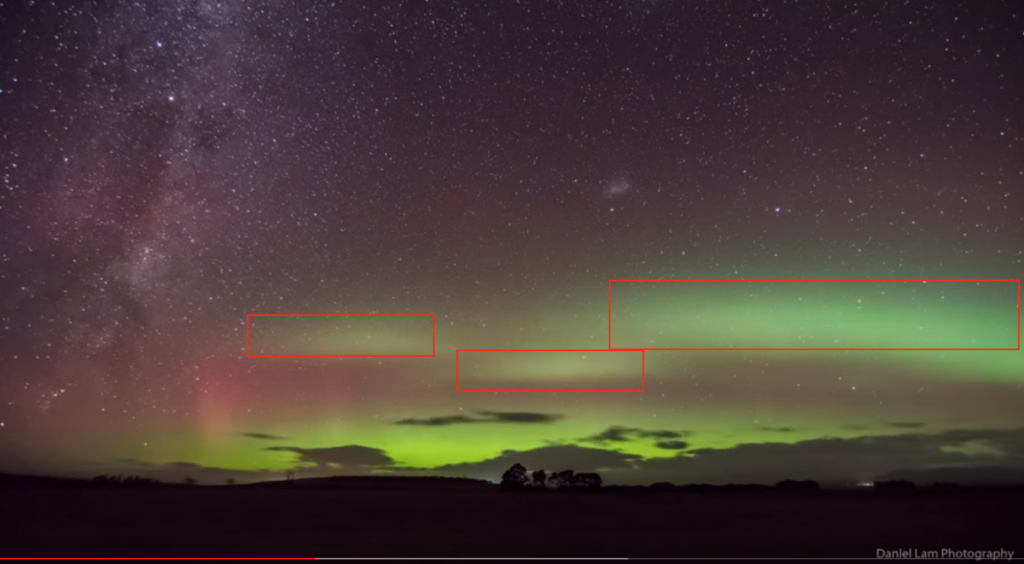 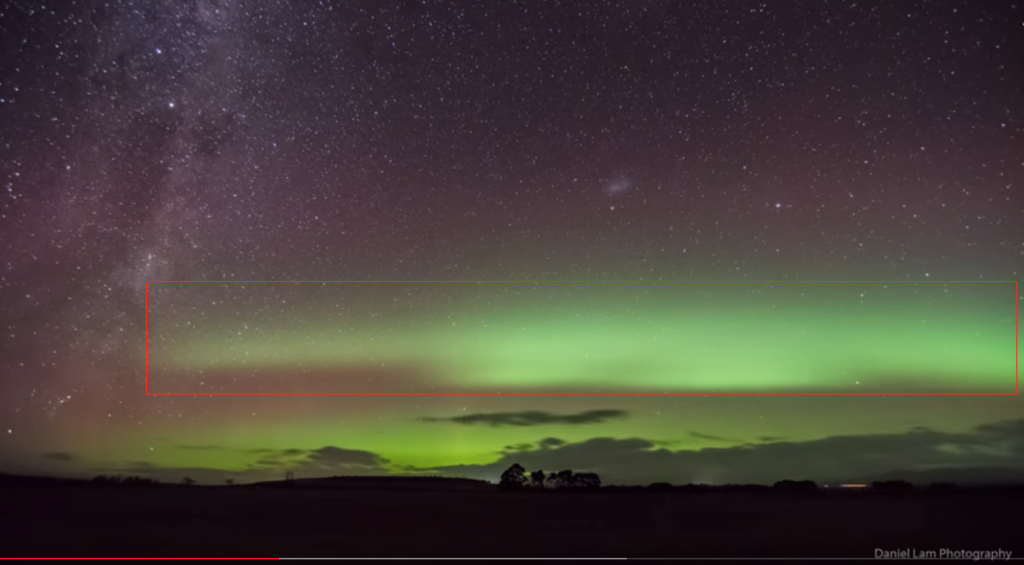 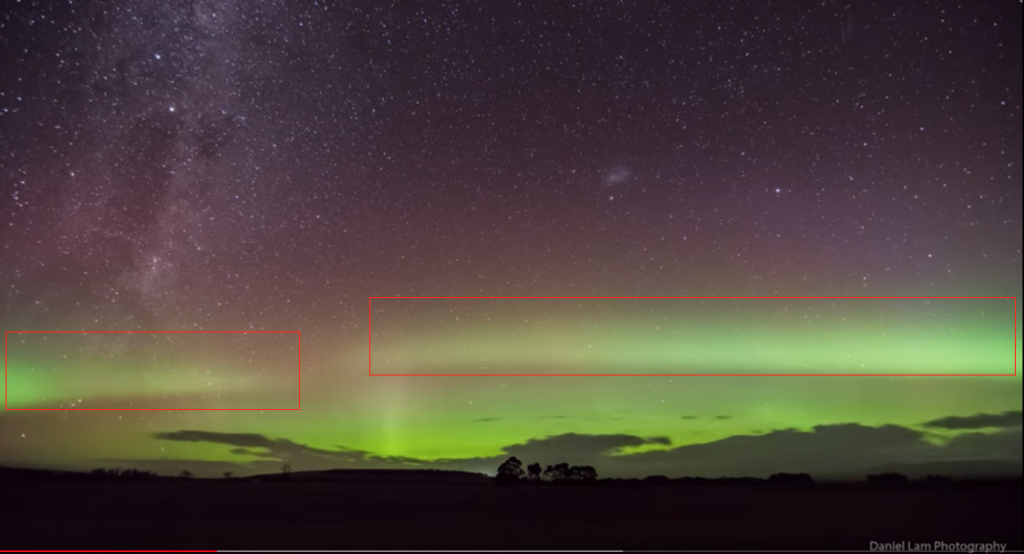 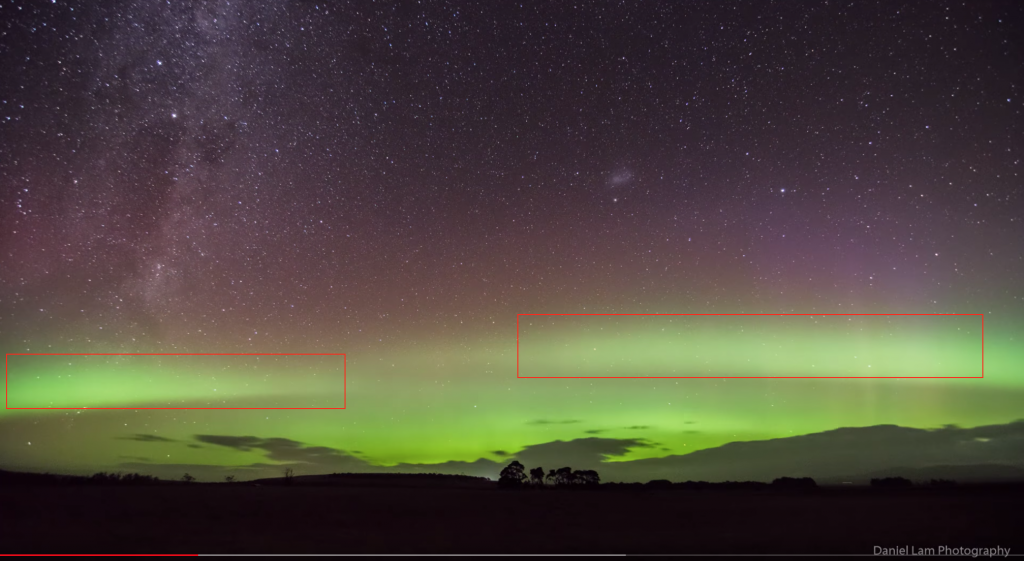 And here’s a really bad example from iOnTheSky (it is obfuscated by moonlight and light pollution): 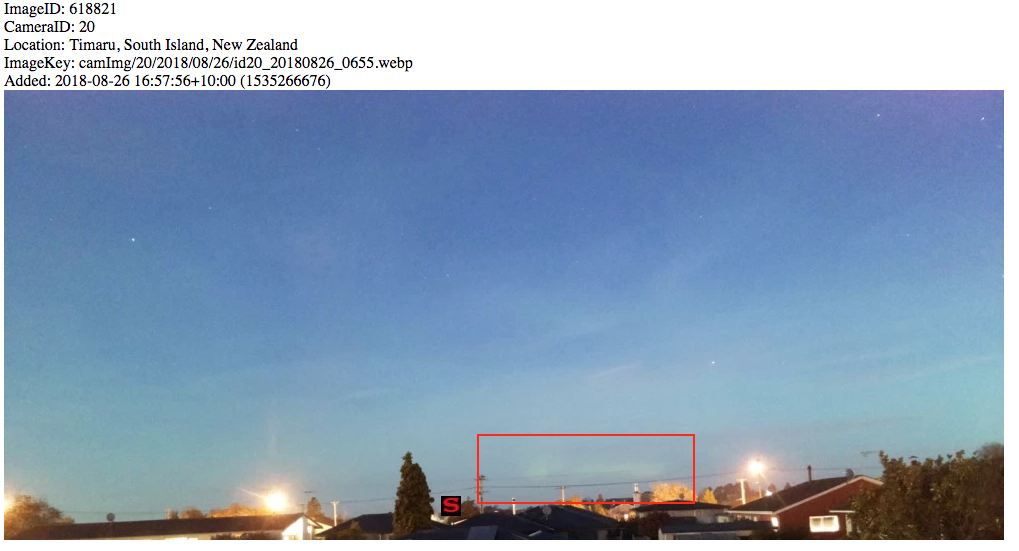 You might also see blobs as “pulses” or flashes of light in timelapse movies. Here’s an example from Daniel Lam.

There are more examples over in SHAG.

Auroral pickets form alongside blobs and their appearance usually precedes the formation of a STEVE (discussed below). They look like beams, but usually are not associated with any auroral arc. They look like a picket fence. They are usually much shorter than traditional beams.

An example from Daniel Lam: 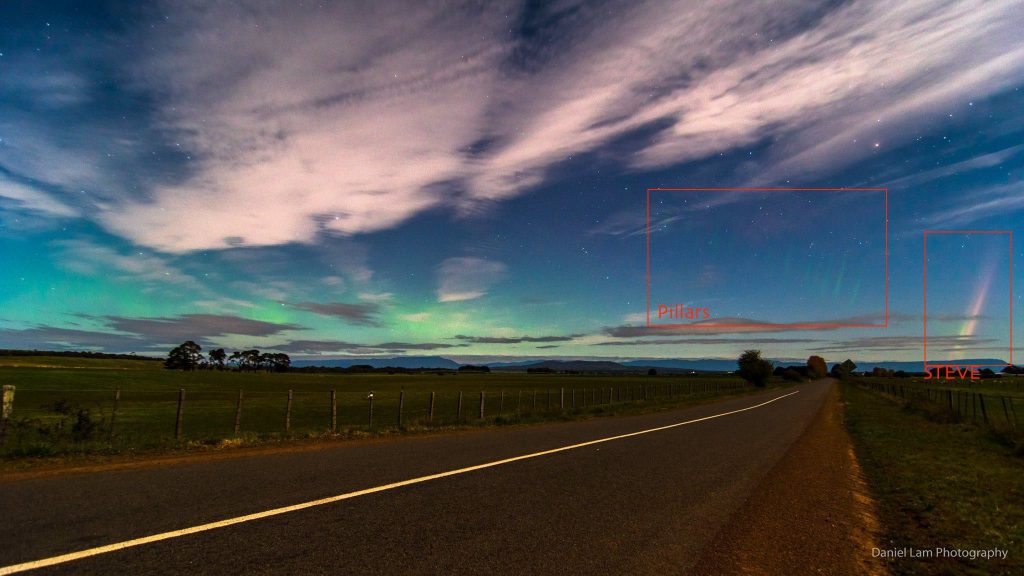 A magnificent example from Marion Madams (with a bright – but regular, and not to be confused with STEVE – beam in the middle)

A few examples from Toby Schrapel in southern Tasmania.

A few examples can also be found in SHAG.

Some say STEVE isn’t auroral. I call BS on that: STEVE only ever happens during strong auroras. It *has* to be auroral!

Anyway, STEVE is a (usually white, or pale red/pink) ribbon or thin arc that forms alongside blobs during intense/very strong auroras. It is always in front of the main auroral arc. It starts off to either the far right or far left of the aurora, and over the course of a minute, it extends right up into the air, above the aurora, and back over onto the other side.

It tends to be short-lived.

Brett Longden captured (and Daniel Lam processed) this timelapse video. Change the playback rate to 0.25x speed and skip through to 33 seconds into the movie to see the STEVE form and dissipate.

STEVE typically begins as a thicker pale beam, as shown in this photo from Paul Stewart: 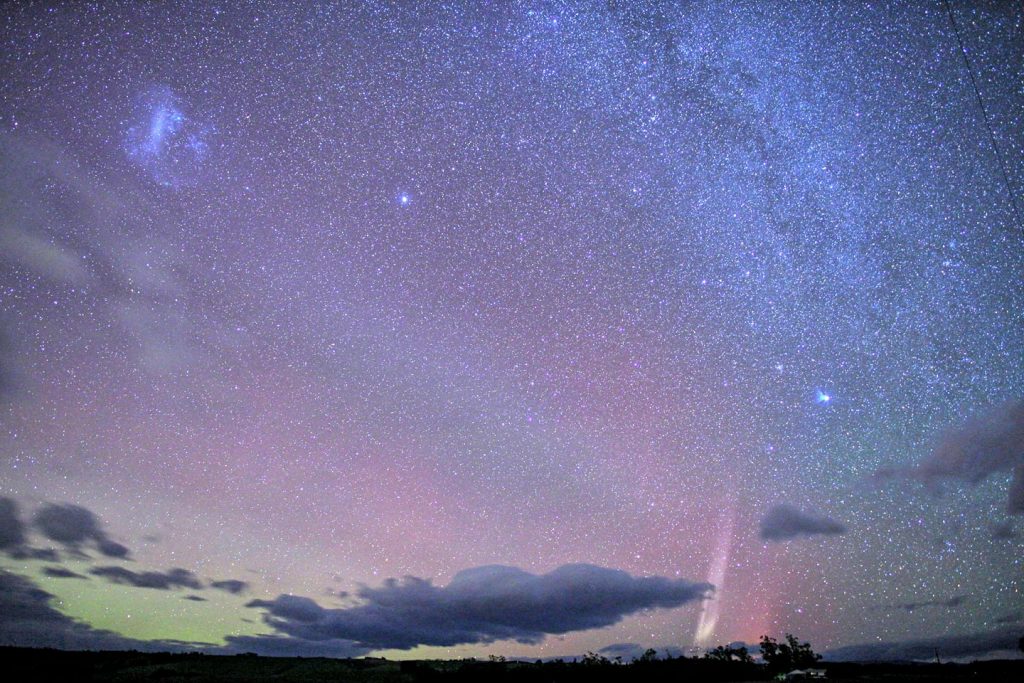 …it then extends across the sky in a massive rainbow/arc-shape. People often report the STEVE extending directly overhead before going back down the other side of the sky.

A few cool videos of STEVE:

If you are closer to the North/South geomagnetic pole than the auroral arc, you are within the Auroral Oval, within which the aurora can be very erratic and randomly-shaped.

Curtains are visible when the aurora is very close. This is the “classic aurora” view you may be familiar with from movies and tourism brochures, especially from the North Pole. It is frequently seen in the Northern Hemisphere because there is land and people living close by, but it is seen near the South Pole too (it’s just not photographed often because barely anybody lives there).

Curtains have a distinct “wavy” look to them. Beams are often seen extending out of them, too.

None of the iOnTheSky cameras are close enough to the South Pole to photograph curtains, so here are some examples elsewhere on the Internet:

Another image by Jan Curtis.

A photograph by Aaron Stanley, aboard the appropriately-named ship Aurora Australis.

…well, actually, there was one night when we had an epic-aurora (26th August 2018), when the aurora was so strong, it was actually above Southland, New Zealand. People further south (at the southern tip of New Zealand) reported having to turn around and face north to photograph it! 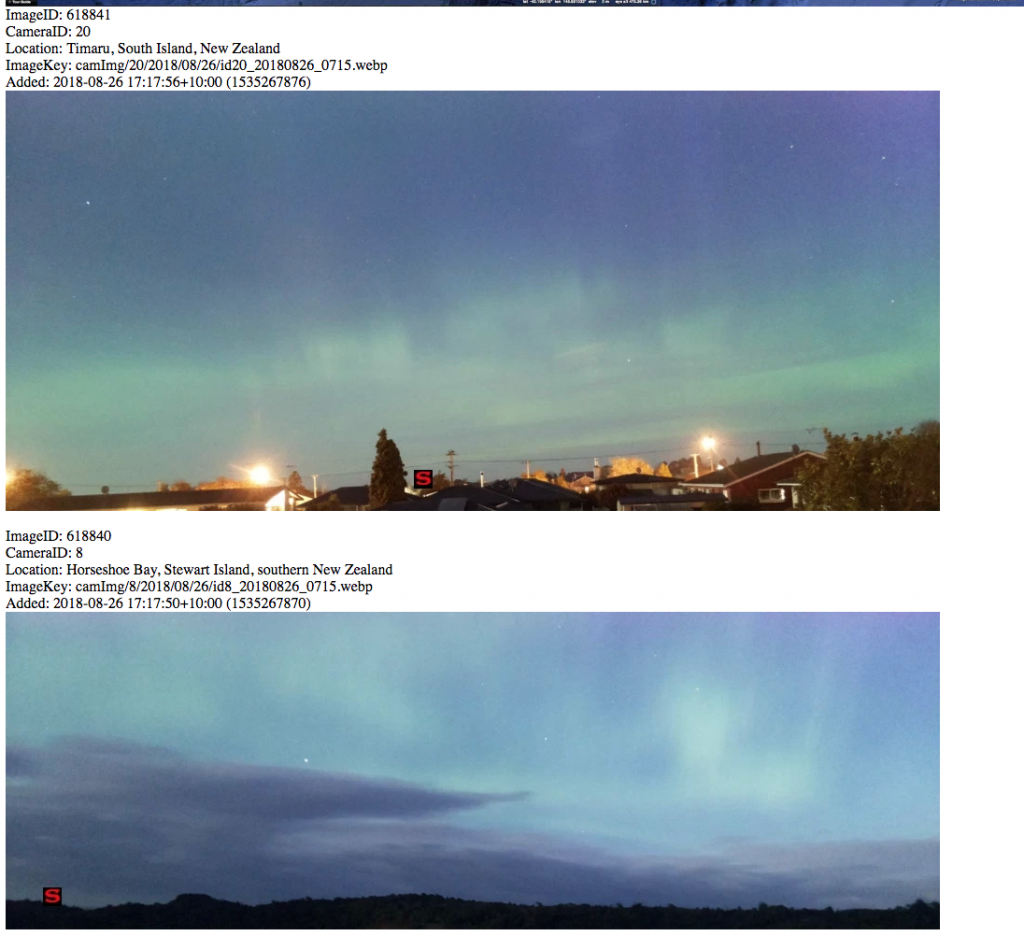 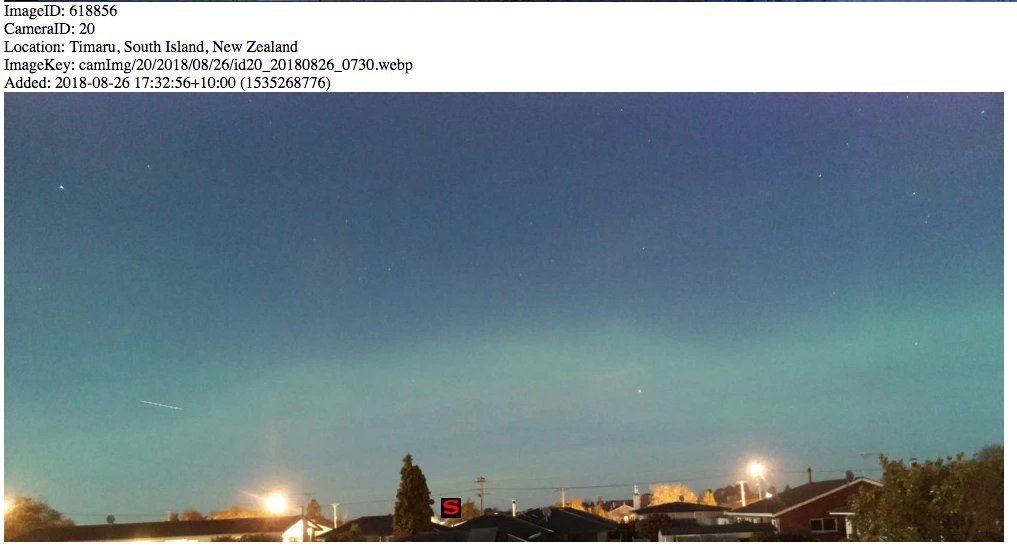 Plenty of more examples can be found in SHAG.

This is the epitome of auroras. A corona aurora is visible when the aurora is directly above the viewer. It looks like the sky is bursting apart or exploding with colour.

Here’s an example from Aaron Stanley in Antarctica.

Here are a few from Robert Schwartz (also in Antarctica).

Here’s a photo from Sandra Whipp on Stewart Island, New Zealand (from that epic aurora on the 26th August 2018 I mentioned in the section above about curtains).

There are countless other examples of corona aurora on Google.

There are also a surprisingly large number of examples in SHAG.

Hopefully, this article has given you a starting point for recognising the various types of aurora.

If you have photographed something that isn’t in this list that you can’t explain, please contact me and I’ll try and figure it out.